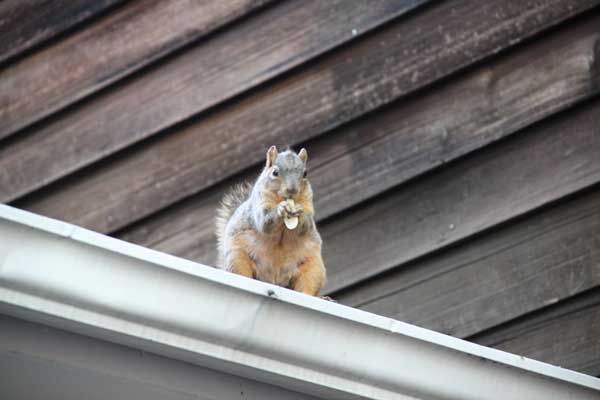 The tops of chimneys are actually inviting places if you are a curious squirrel. They are shady and protected from most predators, and can be cool in the summer and warm in winter. Sometimes squirrels just wander in inadvertently and leave on their own after a bit; other times they can become so happy in your chimney they move in permanently!

Squirrels, and other animals that visit chimneys, such as owls, raccoons, skunks, and foxes, can carry diseases, or parasites such as fleas, which they can pass on to humans or pets. They can also bring nesting material, which is flammable, into the chimney space — this can block the chimney or potentially catch fire, causing major problems. If you have a squirrel in your chimney, it needs to be removed as soon as possible! You can:

If the animal is in the fireplace flue, keep your damper closed! This will make it more difficult for the animal to get into your house, and encourage it to leave out of the top of the chimney.

Make sure your new friend can get out of the chimney. If you’re comfortable climbing on the roof, you can try hanging a 3/4″ or thicker rope down the chimney flue from the top to give the squirrel a big, obvious, and easy route out of your chimney. (The inside walls of prefabricated chimney flues are very smooth, and hard for a squirrel to climb, at least compared with a rope.)

If you are not comfortable on the roof, do not get on the roof! You have other options.

If the squirrel cannot or will not leave the chimney, you can try live-trapping it.

Sometimes it is not possible to remove a squirrel from a chimney yourself. Sometimes they just don’t want to leave, no matter how good the bait in your trap. Animals can also be caught behind parts of a prefabricated (non-masonry) fireplace and chimney. If you hear constant noise but the fireplace and flue are clear, call a chimney professional. An animal may be trapped between the prefabricated fireplace unit and the outside (brick or siding parts) of your chimney. This animal can likely not get out on its own.

If you have a squirrel roaming your chimney and cannot trap it or encourage it to leave on your own, call an animal removal specialist. (Here’s a great guide on choosing one, from the HSUS.)

If you have a raccoon, raptor (owl), bat, snake, or other potentially dangerous animal in your chimney, you may wish to call an animal control specialist. Bats are strong potential carriers of rabies. Raptors are often protected species. Raccoons are fast, and can be aggressive and hard to handle — they can also cause major damage if they get loose in the house! These animals can require special permits or equipment to deal with. Play it safe and call a professional.

Also remember that chimney swifts are a protected bird species, and cannot be pestered or removed from a chimney until they leave on their own. If you find chimney swifts in your chimney, enjoy them — they are eating their own weight in mosquitoes almost every night — and, once they are gone:

Once your new friend has gone or has been removed, make sure your chimney has a secure cap and/or chase cover. These items protect the chimney flue from rain and also prevent animals climbing down inside the chimney. Be sure to purchase a cap intended for use with your chimney type (prefabricated vs. masonry). Prefabricated chimneys have strict cap requirements, and not following them can lead to voiding the manufacturer’s warranty. Consult a chimney professional, who can suggest a cap for you, and install it as well if you like!